As an adult is it too late to start martial arts?!?

Home/Uncategorized/As an adult is it too late to start martial arts?!?

As an adult is it too late to start martial arts?!?

Article from Karate by Jessie:
“…is it just too late?”
Please!!
You already know what I’m going to answer, dontcha?
You’re always too old; it’s always too late; things always used to be better; it’s always a bad time.
So do it anyway
The best time to plant a tree was 20 years ago.
The second best time is now.
But, to be completely honest, I’m not even the right guy to ask if we’re talking personal experience with starting Karate late, because, well, I’ve been training Karate for as long as I can remember. We’re talking diapers here. However, I happen to teach Karate to a lot of passionate people who started later in their lives, so I do have a little bit of experience with teaching late bloomers.
One thing most of them unfortunately seem to have in common is this nagging uncertainty.
“Am I too old to be doing this?!”
Certainly, when you look around at most Karate dojos of today and see these difficult punches and kicks, you get afraid. That’s not something a frail old adult should be doing is it? Sure, some crazy adults are doing it, but they must have some kind of death wish, right? I mean, logically, one can’t really expect to learn anything new at that age, can one? The brain fluid is too dry, nothing new can grow in there. The limbs are too inflexible and the mind is too stale. Your golden days are probably over, and you will surely have to watch most of the class from the sideline, so no idea even trying… right?
Perhaps.
Or perhaps not.
Perhaps all adults just have this competence fetish; they cling desperately to their dignity like a little child does to their security blanket; they want to be good at everything they do, and (they think) everyone expects them to be good at anything they do. It’s like adults are meant to be dignified and able; adults aren’t allowed to show ignorance or confusion.
If you recognize yourself in the above statement, you are not alone.
The problem is widespread – yet the solution is simple. So, by taking a quick look at some cold, hard, science I hope to help you understand.
See, it’s all about understanding the motor homunculus.
Repeat after me:
Motor.
Homunculus.
The reason you, as an adult, will most likely suck bad at any new fairly complex physical activity you undertake is because of a particular part of your brain known as the motor homunculus. It’s the very same monster who won’t let you control your individual toes.
Here’s a picture: 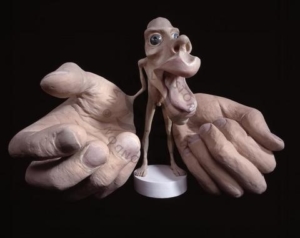 Weird picture, right? That’s because the model is built to reflect the relative area in the motor cortex (of your brain) that is devoted to controlling specific muscle groups.
Notice how overrepresented the hands, lips, and eyes are and how underrepresented the arms, legs, and feet are?
That’s the key.
Here’s the actual motor cortex in the brain: 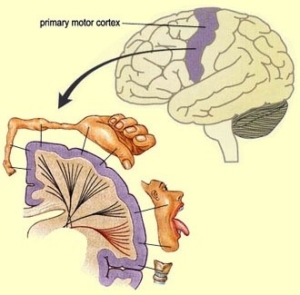 Basically, the more motor cortical area devoted to a region, the greater and finer the voluntary control over those muscles groups we have.
And the beautiful part is – this can be trained.
No matter what age you are.
A quick history lesson: originally the above map was created by Canadian neurosurgeon Wilder Penfield in 1937. Penfield was a dude who pioneered brain surgery on awake patients. He would use a small electrical stimulator to map out different parts of the brain, which is still done by neurosurgeons to this day. His logic was simple but scary: stimulate a part of the motor cortex and watch which parts of the body twitches. This gives a mapping between brain and body – and what he found was a clear topography in the motor cortex.

So what’s the take-home point?
Well, using this Frankenstein-ish knowledge, in 1995 a group of neuroscientists published a paper called, “Modulation of muscle responses evoked by transcranial magnetic stimulation during the acquisition of new fine motor skills” in the Journal of Neurophysiology ( http://www.ncbi.nlm.nih.gov/pubm… ). In this paper, they showed that they could map the amount of motor cortical territory devoted to specific fingers. The authors simply had their subjects train on a piano and mapped motor cortex finger representation before and after training.
Here’s what they found, and it’s good news:
Over the course of 5 days, as subjects learned the one-handed, five-finger exercise through daily 2-h manual practice sessions, the cortical motor areas targeting the long finger flexor and extensor muscles enlarged, and their activation threshold decreased.
Thus, they demonstrated that even adults show cortical plasticity after just a couple of days of simple muscle training.
That is, piano practice caused the amount of brain devoted to voluntary muscular control to grow. Just like training Karate will make the relevant areas in your brain suited for Karate grow.
Which gives us a pretty convincing conclusion to the whole “am I too old to begin Karate?” dilemma:
Although you may not currently be able to do all the crazy Karate moves you wish to do (or control your individual toes for that matter) there’s no reason that you can’t learn how. The brain of an adult is not “set in stone”, and will respond to training just fine –as long as you forget what adults your age are “supposed” to be doing on their spare time – meaning you actually need to put in some effort into jumping around in your white pajama (with pride).
The reason you suck at Karate is not because you’re too old.
It’s because you haven’t practiced, and therefore the “Karate area” of your motor cortex is still too small to allow fine control in your movements.
You’re not old.
You’re just untrained.
And if you refuse to believe that, you are essentially refusing to believe science.
It’s never too late to exercise your brain’s plasticity. You didn’t start as a kid? Who cares? No need to let the first decade of your life make all the rules. After all, most of your life will be spent in the other decades, right? And for Matsumura’s sake, don’t skip stuff that seems too hard. You can do it all – kumite, kata, bunkai, sparring, kobudo –right off the bat. Just don’t expect to be a World Champion from day one. Nobody else does. But waiting until you’re “good enough” to start doing certain stuff in Karate is like waiting until you’re no longer thirsty to start drinking.
Just makes no sense.
So don’t try to fix the past, fix the future.
You’re going to live there for the rest of your life.
Karate is for you.
You’re never too old.